The Broncos – Steelers opening kickoff sailed through the thin air, doinked off the cross bar, and settled precisely on the 20 yard line: the perfect touchback. Perhaps the man upstairs was sending us a sign.

Last week, I picked the Giants, Saints, Steelers, and Bengals to advance. I got the NFC picks right, but the Texans defense/running game combination worked perfectly against the Bengals, and the Steelers were done in by numerous injuries and some beautiful deep balls from Tim Tebow. Perhaps this week I’ll try flipping a coin instead of choosing games, or maybe just pick home teams (all four home teams won; only the Broncos were challenged).

There are 11 playoff games total each year. Regular season True Wins and actual wins each predicted  the Texans and Saints games correctly in week 1 of the playoffs (you can read about True Wins in my previous post — they are a simple but predictive luck-free approximation of team quality): 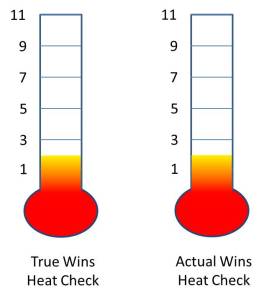 This year is strange in that True Wins and actual wins will give the same prediction for every possible remaining game except Saints – 49ers this weekend (both teams have 13 wins, but the Saints have 0.5 more True Wins) and possibly the Super Bowl. In other words, all of the playoff teams were lucky to a similar degree this year, so accounting for regular season luck isn’t so important for prediction. Before I make my picks for next week, let’s look at some interesting moments in this week’s games.

The Bengals came undone on a single play. With the score tied at 10 late in the 2nd quarter, the Bengals had a chance to take the lead. Instead, defensive end J.J. Watt leapt at the line, miraculously snagged Dalton’s pass at short range, and lumbered into the end zone. I’ll give the Texans credit for this one; on the replay it looked like three other Texans (and no Bengals) were ready to catch the ball, had it gotten past the line. The Texans settled into ball control mode and relied on their good defense to stop the Bengals (a low scoring team all year). Big touchdown plays from Andre Johnson and Arian Foster iced the game. I expected a low scoring game with two young quarterbacks and good defenses, but the low scoring was limited to the Bengals.

The Saints have now scored over 40 points in 4 straight games. They are averaging 42 points per game at home. The Lions showed off their bad defense by giving up 45 points to Packers back up QB Matt Flynn in week 17. Even with safety Louis Delmas back in the lineup, the Lions could not stop the Saints. This is not hyperbole: the Saints had zero punts in the game.

I can’t decide whether luck favored either team in this game. The Saints had multiple dropped balls in important situations in the first half, and the Lions recovered two fumbles (fumble recovery is basically a coin flip), but the Lions also dropped two interceptions. Perhaps the worst breaks, however, were generated by the officials. Adrian the Canadian broke down two plays in an earlier guest post: (1) Brees’s reach over the pile to convert a 4th and 1 and (2) an inadvertent whistle that prevented the Lions from returning Brees’s earlier fumble for a touchdown. In both cases, the refs’ decisions helped the Saints immensely.

I’m not really complaining though. The Saints made their own luck by smartly going for the first down on 4th and short near midfield. This is almost always the correct play by the probabilities, and the Saints converted all three tries. The Lions tackled poorly, they couldn’t stop the run or pass, and they are a bit one dimensional on offense (with the one dimension being Calvin Johnson). They MUST upgrade the offensive line and secondary next year. These two areas have been the Lions’ weak spots for nearly a decade.

The scoreline, 24-2, looks more like the Bulls record during the 1995-96 season than a football game. The Giants were the better team, but it could have been closer. Tied 0-0 at the end of the first quarter, the Falcons faced 4th and inches on the Giants 24. Falcons coach Mike Smith decided to try the QB sneak and failed; Aikman hollered in the booth (mostly after the 4th down try failed) that Atlanta should have kicked the field goal, though he didn’t give much of a reason why. Probability analysis says go for it on 4th down and short, since teams convert these at a fairly high rate, and you’re very likely to get 3 or 7 points following the conversion.

The Falcons faced an identical situation, down 10-2 in the 3rd quarter. Smith ran a QB sneak again and failed again. Cue Aikman hollering. Smith also ordered a 4th down try in over time on his own half of the field against the Saints this year. The Falcons also failed on that attempt, and the Saints won the game. That conversion attempt was certainly more questionable, since failure meant an almost certain loss. Still, Smith should not be blamed for going for it against the Giants yesterday. Field goals in these two situations would have made the final score 24-8 — not close (Aikman admitted this with a few minutes left in the game).

However, I do blame Smith for two other key decisions. Fresh off the first 4th down failure and ahead 2-0, the Falcons faced 4th and 1 on the Giants 42: punt. Stick to your guns, Smith! Maybe this was the one you would have converted, leading to a 5-0 or 9-0 lead.

Then, on the last possession of the first half, the Falcons (trailing 7-2) got a first down at their own 30, got a couple more yards, and made no effort to stop the clock. There were still more than 30 seconds left and the Falcons held all three time outs. They had plenty of time to go for a field goal and enough field position to punt out of danger if needed. Instead, the clock ran, Matt Ryan scrambled, and the Falcons called a time out with 4 seconds left for a 4th down Hail Mary. Confusing.

One last thing: I can’t figure out Eli Manning. How did Atlanta get a safety? Manning was too weak to get the ball to the line of scrimmage while being tackled on the run in the end zone. From every angle, he seems like a terrible athlete, but he had another great playoff game yesterday.

As expected, the Steelers jammed the box in the first quarter and shut the Broncos down. However, they got no pressure on Tebow for most of the game and eventually the Broncos took advantage. Tebow made a number of nice deep throws, including two for touchdowns (one in over time).

My gut reaction was that the Steelers should have played back more on the receivers. Tebow isn’t very accurate, so it seems wise to make him work down the field. However, Tebow ate up prevent defenses in the regular season. He does a good job of making the easy throw and using his feet. Instead, I think we learned that Ryan Clark (not Troy Polamalu) is the Steelers defensive MVP. He could not play in the game due to a blood condition that is exacerbated by altitude. The deep middle was open over and over again in his absence.

The Steelers were really unlucky with injuries this year. I think they are the best team in the AFC, but between Clark and Mendenhall missing the playoff game, Roethlisberger barely able to play, and a number of defensive starters out, they had too much to overcome. I was calling for Charlie Batch from the first snap.

The game would have been over in the third quarter but for another inadvertent whistle by the referees. Roethlisberger threw a slightly backwards pass that was dropped by the receiver, and the official blew his whistle. Since the ball was passed intentionally by Roethlisberger (rather than slipping out of his hand), the “Hochuli Rule” does not apply, and the call was not reviewable. Phil Simms and Jim Nantz clearly had no idea how this differed from the Lions situation on Saturday (which was reviewable). More to come on this from Adrian the Canadian.

Saints at 49ers. Did we maybe see some chinks in the Saints armor on Saturday? The Saints only lost five fumbles all year, which surely aided their regular season performance. I don’t think fumbles are a sign of skill. The Lions dropped two interceptions as well. Still, I have to go with the True Wins prediction (11.5 for the Saints to 11 for the Niners), since it might be the last time that will be meaningful. I’m also convinced that the Niners are the defensive version of the Lions (an improving team with one great unit and one bad unit that needs another year or two). I’ll be visiting New Orleans during this game, which I’m really excited about. Expect a close win for the Saints.

Broncos at Patriots. It was fun while it lasted, Broncos. Tebow will have to outdo his passing performance against the banged up Steelers to have any chance. I don’t see it happening. Belichick seems to revel in destroying teams like the Broncos that survive on overconfidence (see: New York Jets, 2011). He even hired the Broncos’ old coach this week. True Win coming right up for the Patriots.

Texans at Ravens. Despite the Texans strong performance against the Bengals, I still think they are in over their heads with Yates at QB. The Ravens are like the Bengals super sized, with a stronger defense and a shaky but experienced QB (Flacco). They should have no trouble with the Texans.

Giants at Packers. Last week, I harped about the Giants ridiculously hard schedule. They are a much better team than their record (by wins or True Wins). On top of this, big names Bradshaw, Umenyiora, Tuck, and Amukamara (among others) missed time but are now healthy. The Giants are peaking at just the right time. Unfortunately for the Giants, they face the Packers at Lambeau on Sunday, and starting cornerback Aaron Ross will probably be out with a concussion. I think the Giants will cover the spread, but the Packers will find a way to win. The Giants best hope is to see Rodgers start slow after his 3 week vacation and to create turnovers with their strong pass rush. The Giants are a tough match up for any passing team, since they can get to the quarterback without blitzing (see: Patriots in the 2008 Super Bowl).